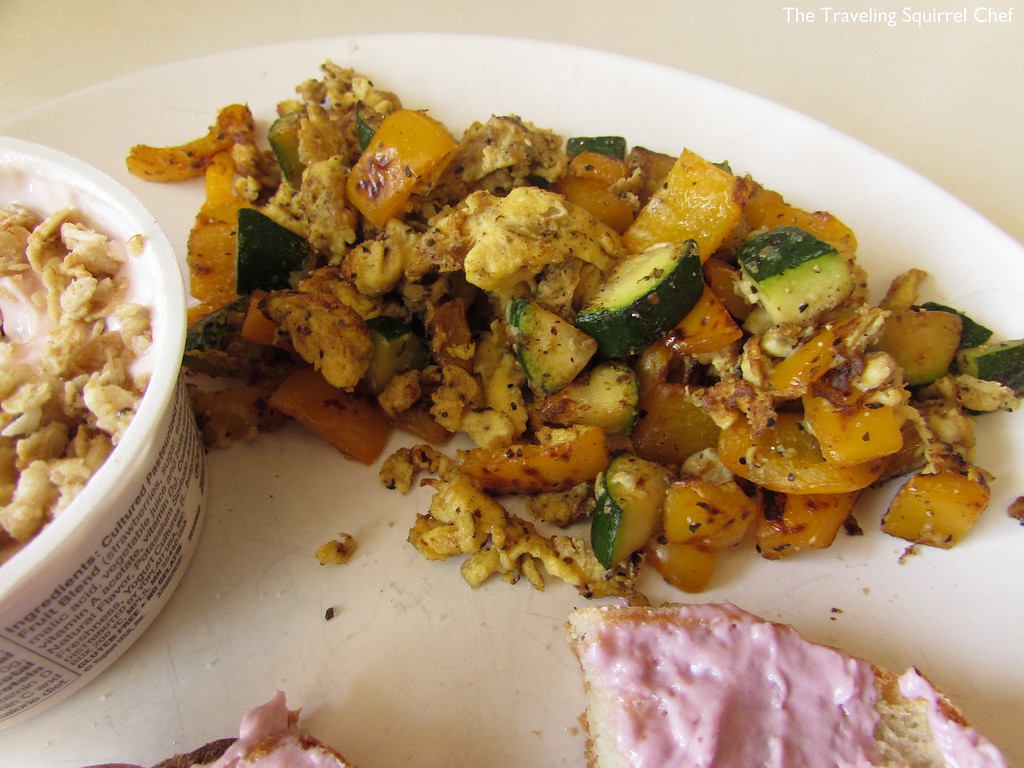 I’ve posted previously about how great chopped up bell peppers and/or squash and/or zucchini are as a breakfast side, with parmesan or just sea salt and black pepper. For this breakfast, I also added some scrambled eggs to the mix. The other food on the plate is crunchy cereal with yogurt, and an English muffin with berry-flavored cream cheese. END_OF_DOCUMENT_TOKEN_TO_BE_REPLACED 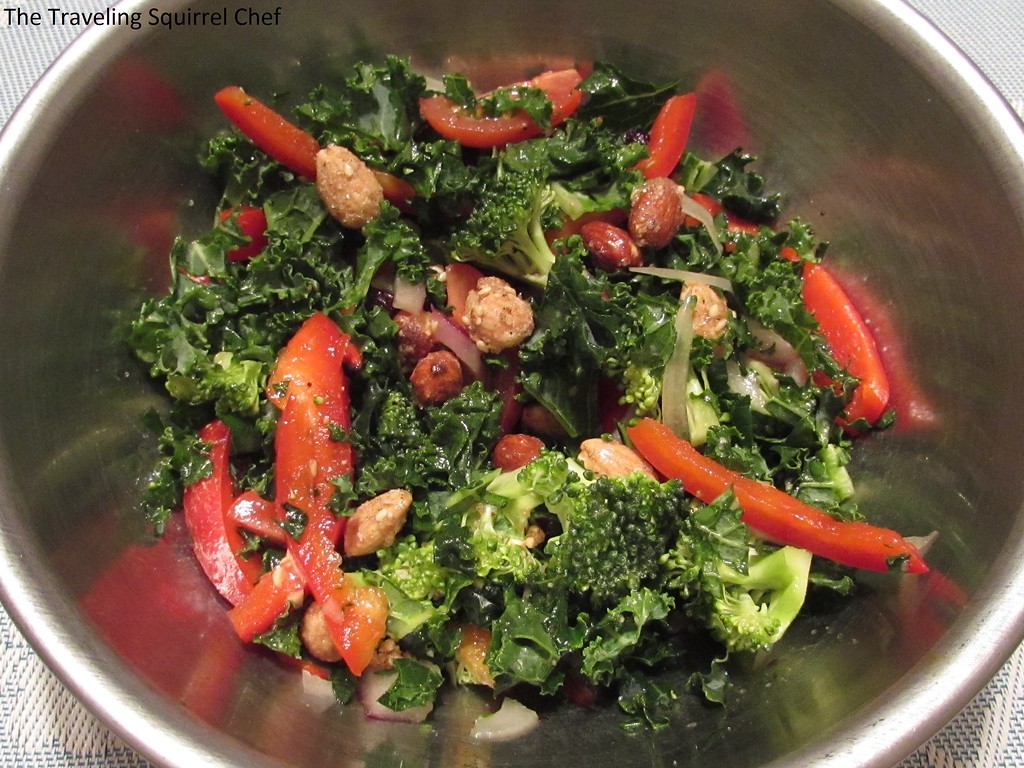 Today I’ve actually got one of my own recipes for you: A very dark green, healthy salad with glazed nuts and cranberries in there so you don’t feel TOO healthy. I came up with this rather fortuitously one night when I thought I had “nothing to eat” and it was a great discovery. Since then, I’ve purchased dried cranberries for future salads. Recipe is below, and you should adjust as you wish. END_OF_DOCUMENT_TOKEN_TO_BE_REPLACED 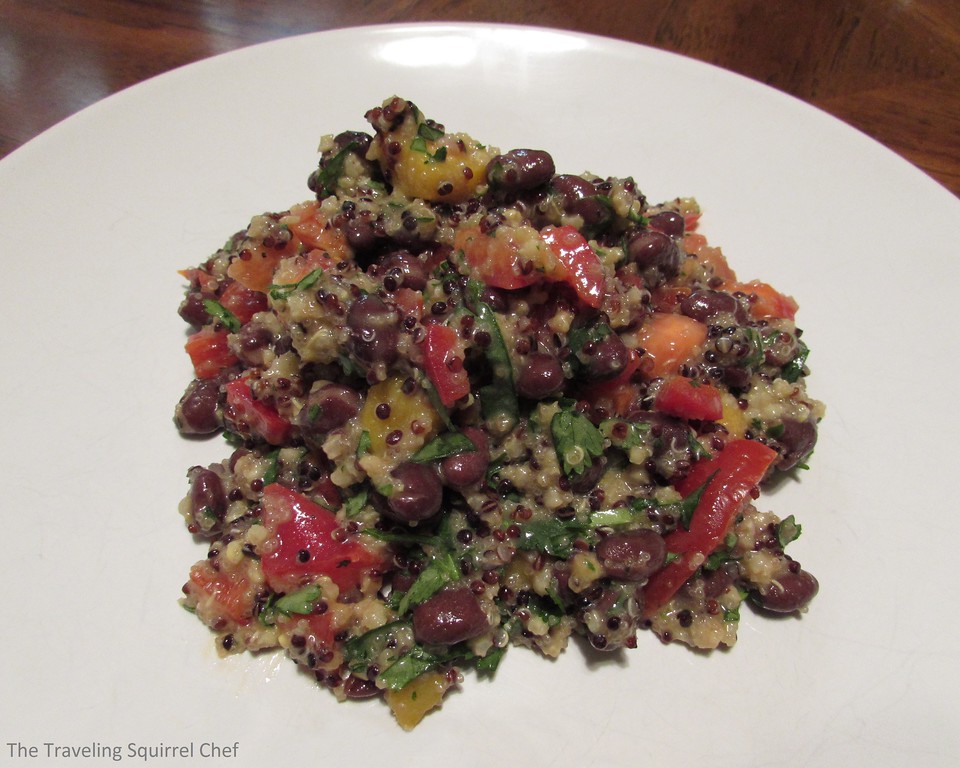 I posted before about how, when we tried to buy quinoa, we accidentally bought a quinoa-amaranth-millet blend (oops) which came with a recipe we wanted to try as soon as we got a mango. Here’s the recipe (called “Ancient Grain Mango Salad,”off the package of Sonoma Farms brand Organic Quinoa Ancient Blend): END_OF_DOCUMENT_TOKEN_TO_BE_REPLACED

Oh. My. Gosh. On May 23, 2015 I invented something simple but delicious: Bacon bits (from 3 slices of bacon, but I trimmed the majority of the lard off first so it’s healthier than it sounds) cooked with a yellow bell pepper (half a pepper, in chunks), some ground sea salt + ground pepper, on (boring, white) toast, with the extra on the side. Incredible. If you love the taste of roasted pepper, imagine that infused with bacon. END_OF_DOCUMENT_TOKEN_TO_BE_REPLACED

We’d been eating a lot of heavy foods END_OF_DOCUMENT_TOKEN_TO_BE_REPLACED 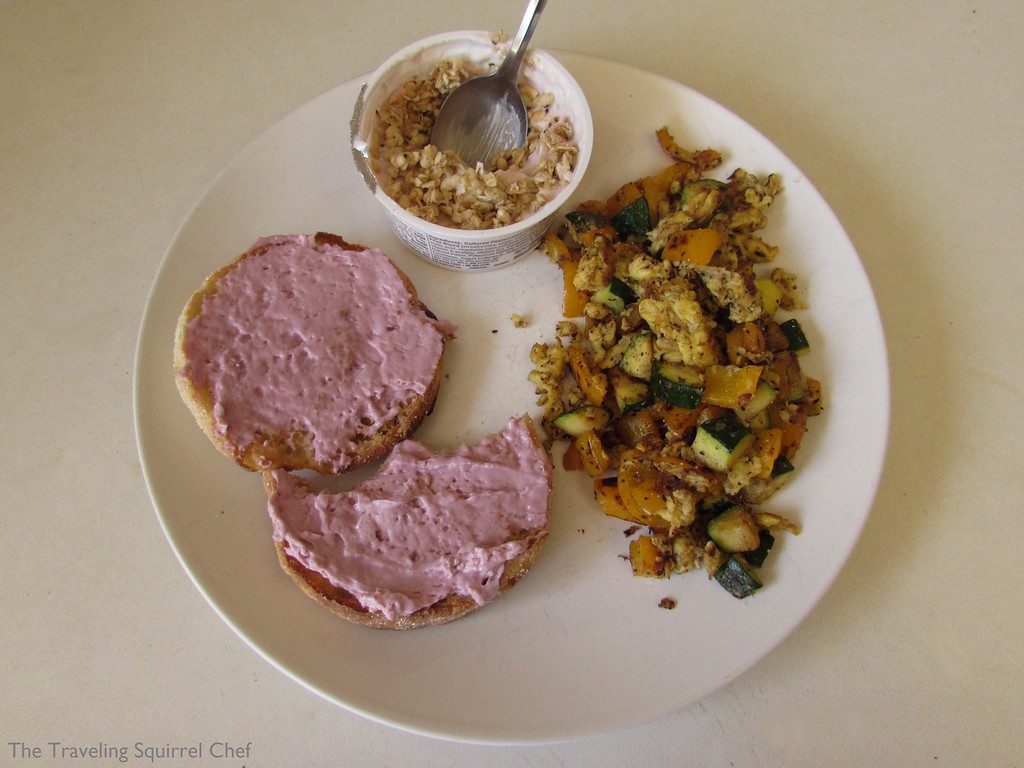 Mmm, eggs & yellow bell pepper, heavy on the bell pepper. (When I make eggs + stuff, the eggs often aren’t the base; they’re merely one of many ingredients.) This was the perfect tasty breakfast to consume with coffee while editing my dissertation for the umpteenth time. Speaking of which… I have a PhD* now!!!

END_OF_DOCUMENT_TOKEN_TO_BE_REPLACED

This corn soup recipe is from Leanne Brown’s Good & Cheap (free PDF version available here). Like chili and many other things, it’s a great thing to store in the freezer for later. Having made it four times now, advice I can add (which will make sense if you’re looking at the recipe) is this: END_OF_DOCUMENT_TOKEN_TO_BE_REPLACED

As much as I love the combo of mushrooms, onions, carrots, radishes, etc., one too many such salads  becomes boring. So, when some arugula came into our hands at the same time as we had strawberries, I was eager to try to emulate a tasty arugula + mixed berry salad I had at a UCLA event once. Aiming for a sweet-ish, nuts-and-berry theme, I avoided most of my usual salad stuff and instead added a yellow bell pepper and raisins, and some chopped pecans (we were out of walnuts, but, also, pecans just seemed fitting). For the dressing, we used the same dressing as for the mixed tomato salad (from Gordon Ramsey’s Fast Foods) that I did a post on earlier.

The verdict? It was great! I would love to try it again with FRESH strawberries (the ones we used were frozen), maybe raspberries or blackberries in addition to or in place of the raisins (the raisins were great, but the salad I was trying to copy had raspberries), and a different dressing (the one we used worked well, but I think the original recipe had a strawberry viniagrette). Oh and I bet candied pecans would be great in this!

Here is the approximate list of ingredients, then, for TSC’s Strawberry-Raisin-Arugula Salad: Arugula, sliced strawberries (and raspberries?), yellow bell pepper, (candied) pecans or walnuts, raisins, and any dressing that works with nuts & berries.

Fajitas! This marks the only time since, like, 2006 that I bought beef that wasn’t ground. Well worth it! Unfortunately, since this was in 2011, I don’t recall the recipe. As you can see from the photo though, it was pretty typical: onion, bell pepper, beef, plus sour cream and guacamole.